Summer Gripes: You RUINED Me, Scandal

I began some relatively inconsequential but strange behavior the day weekend period of my life where I watched ABC's Scandal:

It's only very recently that I'm into “planning”—in the sense of “making plans” “in advance.” And it seems best to plan these things in advance.

This is a strange predicament. Because deep down I know very well that I am not interesting or important enough to spy on or murder.


But a bigger predicament is that the show is not good. I gave it a significant portion of my 30s, and I actually don't even like it. I don't like the characters or the plot or the dialogue. But that did not stop me from consuming two entire seasons in the blurry passing of what I think was a weekend. People compare crappy serialized television they binge watch to being “a train wreck I can't look away from.” But I really think that I wouldn't have too much trouble looking away from a train wreck. Seeing a train wreck sounds, first of all, unlikely and, second of all, terrifying.

I have a memory of seeing a car accident so severe that there was a woman lying on the road whose clothes had been partially ripped off of her from the impact. I do not know if this is a memory from something I saw in real life or something I saw in a movie or if this is actually someone else's memory that they shared with me. Because that's how traumatizing a terrible accident is to view. It can short-circuit your brain.

So, apparently, can this miserable excuse for a television show.

I can't really figure it out, but here are some potential reasons I think that I lost such a sizable chunk of my life to this piece of garbage:

OPTION 1: As my dear friend and binge partner in crime put it, “We didn't have anyone to stop us that one night.”

I'm not really okay with this, because it implies that she and I were incapable of making good decisions that night her husband was out at a concert—the night we consumed 3 cups of mayonnaise-based dips and 5-pounds of french fries. Each.

It's just so sassy and powerful and I wanted to know more! But this is totally from season 3!

OPTION 3: Kerry Washington is the most beautiful woman in the world.

OPTION 4: Kerry Washington's lips have their own gravitational pull.

OPTION 5: The way I felt when I realized Olivia Pope really didn't have it all together.

It wasn't like that weird and delicious schadenfreude-ish euphoria that comes from learning the hot mean girl who tormented you sophomore year had three kids by age 20 and now works as an orthopedic-wearing, mordbily obese cashier. It was just like, oh, there is some complexity here other than being a superhuman, flawless white-suit-wearing robot.

There is such a blatant lack of chemistry between the various characters that I actually made the assumption that it was intentional and somehow brilliant.

First of all, I'm really sorry about the number of gifs in this post. I don't think it's okay. Also, I searched high and low for the right still of her face. This isn't it, but it almost hints at it. 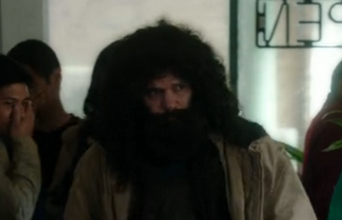 I think at least three of the episodes I watched can be accounted for because I was voraciously waiting to learn that this wig/beard combo was a joke.

*DO NOT google "Scandal Finn" unless you just love Catholic scandals

But I think what I'm really so upset about is not that I gave so much time to this wasteful endeavor but that so many others who have done the same feel like their time has been justifiably and even enjoyably spent. Do you want to feel sad? No? Wait, I don't understand. You don't want to purposely make yourself feel terrible about the state of humanity? Uhm, okay. That's totally your call. Then definitely do not read any of the comments on Hulu's Facebook auto-feed feature. Because you will not want to read comments like this:

"I absolutely love love love this show. I love the relationship between fitz and olivia. this show is just crazy good!

SPOLER ALERT: The “relationship” this commenter is referring to is a series of absurd and horrifying exchanges between Fitzgerald Grant, the married President of the United States, and Olivia Pope, a former lawyer, White House aid and political crisis manager. They were driven to an affair that is portrayed in semi-violent/passionate depictions of interactions that can best be described as “not really seeming all that consensual really.”

But what do I know about love besides my now-shredded pile of takeout condiments love letters from former boyfriends?

Also, if you don't want to feel sad, definitely don't think about the fact that by the time I actually post this, I will have spent NO LESS THAN four hours doing the following:
That's four hours compounded by two full American seasons—not some pansy British or Canadian season with a flimsy 6 episodes—of 43-minute episodes.
Posted by Unknown