You know that feeling where you feel like you're forgetting something? I'm not talking about that thing where you're standing in the basement empty-handed trying to remember what you went down there for. I mean that vague and nagging whisper of discontent...

Aren't you forgetting something?

In December of last year I was somewhere around the region of the tea plantations in Sri Lanka. My travel partner, Kady, and I hadn't planned much beyond Taksim Square in Istanbul, where we met in early November to commence three months as an idiot adventure duo. So we were winging it in Sri Lanka, big time.

We had tacked on Sri Lanka to our travel itinerary merely for the sake of it being so close to other places we were going, and also, to quote Kady when she was going through her “girlfriend” phase: “Girlfriend, we have to go to Sri Lanka...because it's another country.” So, landing in Sri Lanka, we knew something about elephants and something about tea plantations, and that was pretty much it.

Our mission to see the tea plantations led us to a town whose name I cannot at this moment recall. I think it had an n  and a w and some r's and a j. Nwrar j___? Actually I don't really think there was a j in it. For some reason we had decided to not plan ahead but rather to just go with our gut upon de-bussing. I don't know why we made that decision considering neither of our guts have ever served us all that well while traveling together—except to inform us, in the exact moment of escalated danger, that we are, indeed, in a state of escalated danger.

We walked into the first restaurant we saw. We ate what everyone else in the restaurant was eating and even had the luxury of paying what everyone else was paying. Which is really, really fitting. Because then I promptly retired to the bathroom to experience extreme and violent sickness. (My SE Asia blog was pretty much in its entirety a spoiled rant over not being able to pay what the locals were paying to get what the locals were getting.) Violent sickness.


[The only graphic description to follow is not about this violent sickness, but I am going to use the adjective “quavering” shortly, so feel free to stop reading if you don't want to imagine me quavering from food-born illness.]

The most memorable part of this event is that I was certain, and am still certain to this day, that this was the most horrifying bathroom I'd ever been in. I know—how can any bathroom really truly be the worst, grossest bathroom one has ever been in? It's a tall order, I'll admit. But this particular bathroom's vileness triumph can be summarized in one word:

Every square millimeter and crevice of this bathroom was wet with tiny little beads of moisture. Someone had apparently hosed the entire room down from ceiling to floor, but the liquid discharged—and I chose the verb discharged because it is absolutely abhorrent—from the hose could not have possibly been water.

When I traveled through Southeast Asia, I prided myself on my ability to only get violently ill within the vicinity of a Western-style toilet. That was a naive triumph, in retrospect. I learned that the hard way. In that Sri-Lankan bathroom.

For whatever absurd reason, this was a Western-style toilet—the kind a classy lady would not actually ever make physical contact with. But this was a quavering type of sickness. There would be no hovering.

I took several tissues from my packet and wiped away the moisture that existed in the form of one trillion beads of wetness from the toilet seat. I wiped it away, and for a nanosecond the seat was dry. And then it was no longer dry. I watched the moisture re-accumulate before my very eyes, and then I succumbed to my illness and died.

My “best” quality isn't something that's good for the universe or humanity—like kindness or selflessness; it's based solely on self preservation. It's that I can pretty much laugh at any horrible, mutilating calamity that befalls me or my loved ones. It's why I secretly shaved a lightning bolt in the back of my mom's head when I gave her her chemotherapy haircut.

But the sweet dark travesty of this particular event was very nearly lost on me. It wasn't until my sixth or seventh round of violent sickness in that moist den of hell that I remembered to bring a camera to capture the sign that taunted me while I wrestled with my mortality: 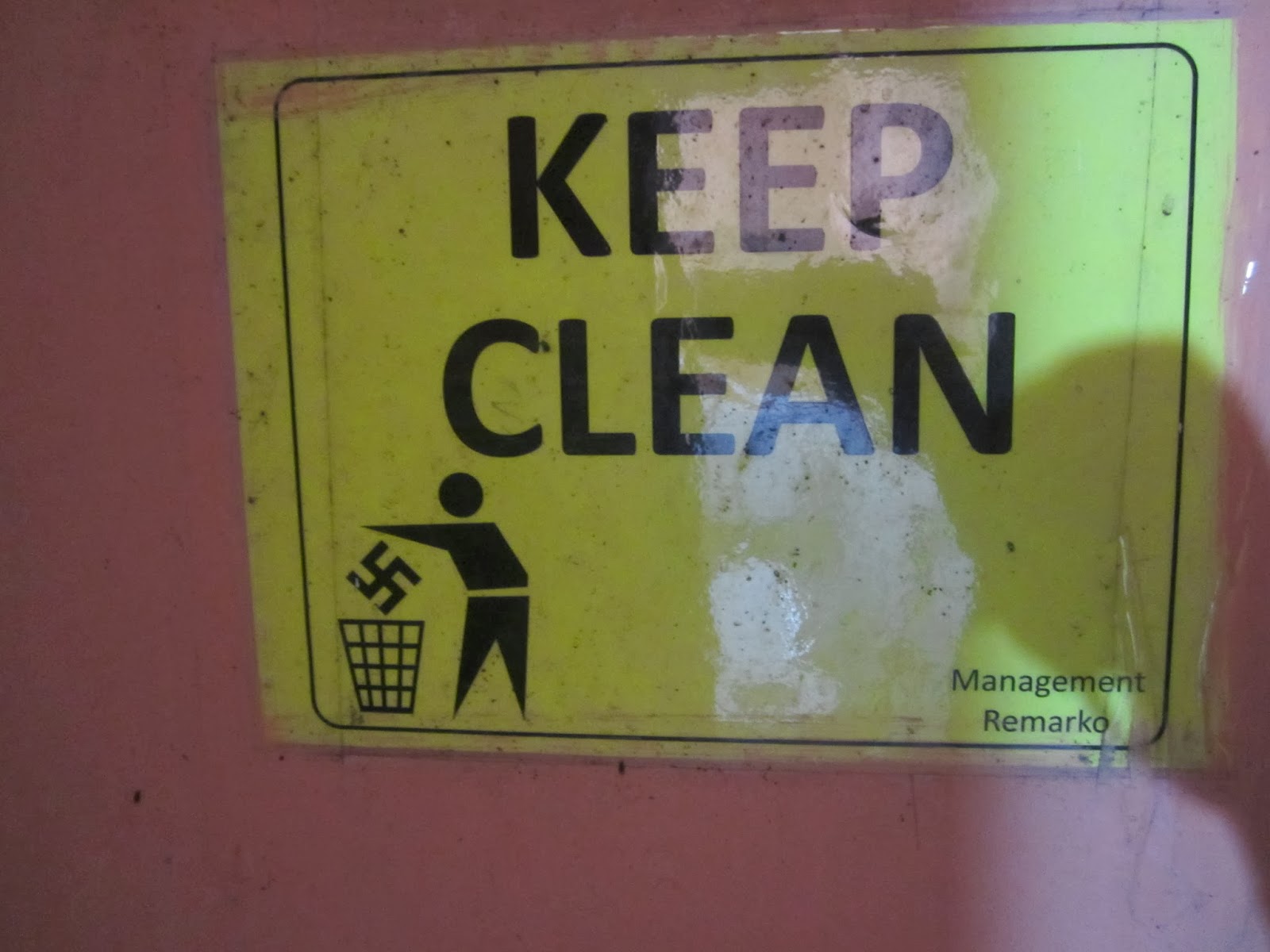 In Part II of this divine story, you'll discover how these events were the perfect catalyst for accidently taking shelter in a convent for two days...
Posted by Unknown

Email ThisBlogThis!Share to TwitterShare to FacebookShare to Pinterest
Labels: 30 while 30, Blog Fodder, Faking It, I'll show YOU Culture, On the Road