I See Your Imitation Colors Shining Through

“When I started singing...I had my heart set on being a background singer. I wanted to be like Mary Clayton—she was a wonderful background singer for the Rolling Stones. You know, I figured if I can't be Mick Jagger, I want to be her...but that didn't work out for me. I couldn't dance and sing well...


“So I fought. And so the manager said, 'Get the one in the back who sings good but can't dance up front and then I'll manage you,' so then I did Joplin covers forever...that was my first gig, doing a Joplin tribute band.”*

And then she was Cyndi Lauper. 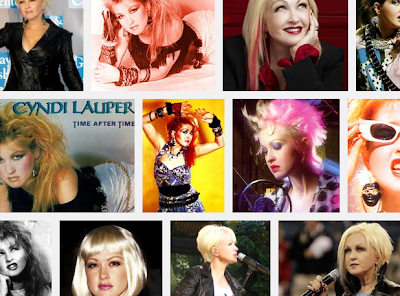 We all recognize Lauper; we all know she sang Time after Time and Girls Just Wanna Have Fun. We might call her an icon.

She decided she'd never be Jagger, so she set out to be a background singer whom I had to google, and then she got her start basically doing an impression of a late performer...

So many artists—writers, singers, painters—struggle with finding an original voice that belongs to only them. As a writer writer, I struggle with it: I was hit with the hard reality a couple years ago when I reread a few blog posts after completing a popular young-adult-fiction novel; I was inadvertently but blatantly imitating the author's voice. And it wasn't even a style I particularly aspired to. And my teenage-hood poetry? A thinly veiled caricature of cummings/Angelou's lovechild to say the least...

In case you're wondering, no, I don't sound like any of those artists...I will never be Jagger.

So what am I supposed to do? How am I supposed to find my voice? I guess the answer is pretty clear. I just have to find some esoteric sidekick and try to be them until someone notices it and then I'll imitate the art of a deceased person and then I'll...I guess I'll go back to publishing stories about sponge bathing in Walmart bathrooms. I guess what I'm trying to say is I'm afraid I may have already found my voice. It is the voice of the narrator of the weirdo who takes her dog to the liquor store so she can play on the carpet.