How to Really Make an Entrance

Kady and I arrived in Goa and headed to Palolem-—the place that had been described to us as the most peaceful beach town around. I pretty much went to bed and didn't do much until the next morning, when something vile finally caught up with me after three weeks in this country. The truth is it's a bit of a miracle it took as long as it did to happen. There's a catchy term for it—more catchy than Montazuma's Revenge:

From what I've read, Westeners can end up leaving a quarter of their body weight behind in India. It struck me somewhere between five and six in the morning. By 11:00 a.m., I was weak weak weak but felt well enough to walk the short walk to the restaurant of the fancy hotel that hides the disassemble-able ramshackle shanty village Kady and I are actually staying at.

I ordered my water, Lavazza coffee (seeing the Lavazza logo feels like winning the lottery in this country) and papaya salad, walked very briskly to the bathroom and back and settled in for some good internetting, which isn't a real word yet but is the perfect word for describing what Kady and I hunker down and do when we finally get a decent wifi signal.

Well anyways, do you guys know about my low blood pressure? Well, I got real low blood pressure. It's not really an issue except when I get really dehydrated (or during unsuccessful medical blood draws, but thats a whole 'nother story). Then things get exciting. Well, the two-liter bottle of water I was nursing just couldnt keep pace with this bout of bad belly. So I'm sitting at the restaurant typing away on my iPad when the telltale signs sneak up on me: pinprick-y tingling in my hands and face, clammy skin and dimmed vision-—like someone is slowly, slowly, slowly turning a dimming switch...until it goes dark.

Before the world went completely dark, while my poor little circulatory system was doing its best to fight gravity and push the blood alllll the way up there to my brain, I managed to get an SOS message to Kady, and then promptly fainted on my iPad. The result was a little something like this: 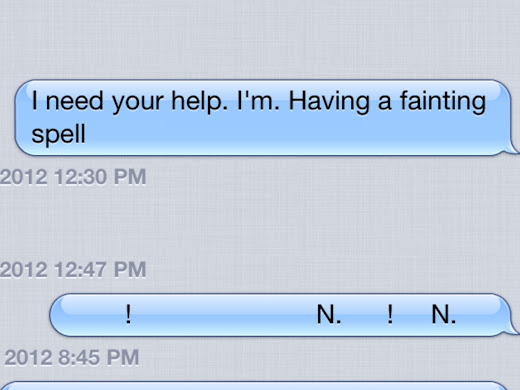 My next memories involve sort of coming to enough to flop my torso onto my lap and hang my head towards the ground... then coming to to spy about four pairs of feet around me... "Madam... Madam... Madam..." ... then the mention of a lounge chair... then spying the lounge chair they brought and thinking, "wait, isn't that the same kind of chair I'm in?" ... then being moved to the "lounge chair" ... then the echo of Kady's voice ... then a bunch of salt water being poured down my throat (quickest way to rehydrate)...
Somewhere in the mix of this charade, which could have been five minutes or five hours, I felt a hand on my forehead and looked up to see sky blue eyes on a handsome face. Kady and the handsome man began chatting and somewhere between coming to or going back under I muttered something like, "Great, now you two are going to become best friends and fall in love."

I started feeling well enough just long enough to go back under for another spell. After hanging my head under the table, Kady and the handsome man helped me back to the room. Salt- and potassium-laden liquids were pushed on me and my feet were propped up. After a few hours I was feeling practically hydrated and Kady walked to see the sunset and get a bite to eat. I was feeling so well I stood up on my feet like a real person and even took a shower! That went so well I even dressed myself (in a different version of pajamas) and tentatively ventured out at 7:00 p.m. for my first meal of the day.

I felt a little shy showing my face at the same restaurant I made such a scene at earlier that day, but it was the closest dining establishment and I suppose I wanted to show up and be normal and all like, "Hey I'm not just some weirdo who goes around fainting in restaurants." I ordered a lime soda with extra salt and an order of fries. The fries arrived, I picked up the salt and then there they were once again—the telltale tingling and dimming. So, eight hours later, I fainted for the billionth time at the same stinking restaurant but this time in front of the fancy dinner crowd. Because I am a weirdo who goes around fainting in restaurants.

I was scrolling through my iPad photos a few days later when I stumbled upon these:

What are friends for if not to photograph you while you're passed out?

Email ThisBlogThis!Share to TwitterShare to FacebookShare to Pinterest
Labels: Help me, On the Road