How Andy Griffith Temporarily Restored My Faith in Humanity

It's quite the paradox: I love air travel; it makes me positively wistful. But nothing makes me feel like an alien like skimming through a Skymall, and nothing harshes me to humans like traveling with them on a plane. (More on that some day...)

Last August I went to New Orleans for a celebratory post-(mid-life-)graduation trip. In addition to the above crank-inducing norms, I was pretty crabby from being scolded by the flight attendant when I put my luggage in the overhead compartment and from having to sit in 29 when my friends were up in 16 and 19.

So naturally I was harshly criticizing—internally with damning soliloquy and externally with the facial expressions I can't help but make when I'm in this sort of mood—everyone who stepped onto the plane. And this one lady across the aisle was breaking a lot of my rules. And by "my rules" I mean "my correct opinions about how one should clothe and comport oneself."

There was still a fair amount of ruckus going on—exasperated latecomers expressing relief at catching the plane, children whining and overhead doors slamming. Then, above all of the chaos rose an ostentatiously loud television cacophony complete with booming dialogue and laugh track. I looked across the aisle at this woman with piercing disdain and here is the worst part—she had headphones. Unplugged. Around her neck. I was lasciviously fantasizing about the scold-y flight attendant verbally lashing her, but within a few minutes we were all instructed to put away electronics and the scene ended.

The plane took off and I took to temporarily projecting my disdain on the woman in front of me with the poopy pants kid.

Twenty minutes after takeoff I looked over at the TV lady again to see what she was up to and hopefully indulge in some really first-rate harsh and silent criticism. Except she was happily watching her show the proper way: with headphones.

The woman's face was beaming with delight. I mean she was just smiling. I was pretty committed to detesting her so I snuck a peek at her screen. I was really hoping for something to further endorse the judgment I had already passed. Something really debased and vile like Two and a Half Men or Saw VI (uhm yes my brain categorizes those things together). But she was watching The Andy Griffith Show.

I let out a sigh, disappointed that the human race—though still capable of inventing, manufacturing and marketing a "day clock," which is a clock that doesn't tell you the time, only the day, and costs $39.98—hadn't completely left me hanging. After all, how can you stay mad at someone so sheerly delighted by watching Barney do something plum silly? 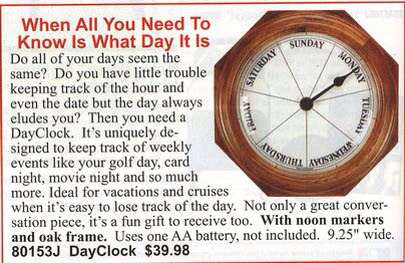 Email ThisBlogThis!Share to TwitterShare to FacebookShare to Pinterest
Labels: On the Road, Soapboxing