Swimming in a Sea

Maldives is perhaps the most striking archetype of jarring apposition and contradiction I've ever encountered.

These are the images that come to mind for most when they think of Maldives: 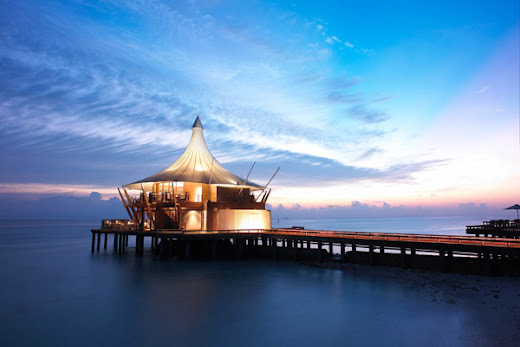 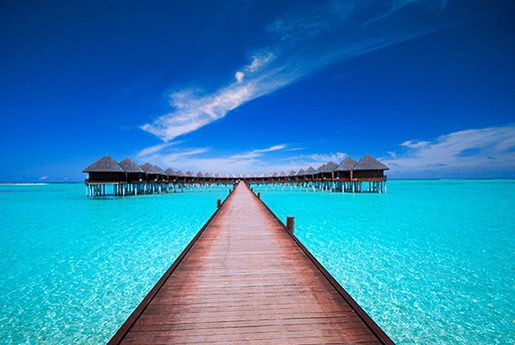 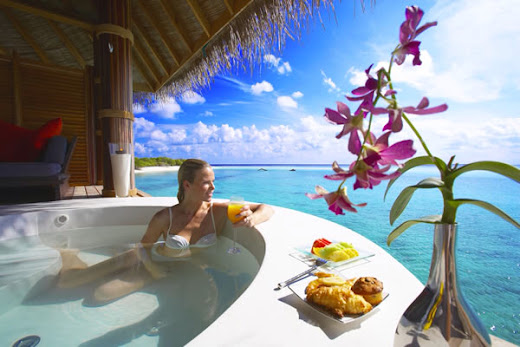 But other than a means of income for many locals, these resorts have very, very little to do with the local way of life.

The country itself is a strictly Muslim country—meaning its laws are based on Islam. It's not the first Muslim country I've kicked around. Turkey, my whereabouts a few weeks prior to landing in Maldives, is considered Muslim. But Turkey is a secular Muslim country; its laws are not attached to Islam.

For example, alcohol—prohibited in Islam—is readily accessible in Turkey (though the most expensive of any country I've ever visited), but you will hear the five calls to prayer over loudspeakers throughout the entire country daily, and many other religious groups are not recognized. This generation of youth might not attend Friday prayers, but unmarried couples may for years hide their cohabitation from their family and even their employers. Mifu, our host on the small island of Gaafaru, scoffed when we drew a comparison between his native country and Turkey. “Turkey,” he frankly declared, “is not Muslim.”

When I arrived in Male with my travel partner, Kady, my demeanor, which had grown uncharacteristically guarded during our exhaustive and harried stint in Sri Lanka, loosened immediately. We descended the plane and walked across the Tarmac into the main building. Passport control met us with shrugs even though we were vague about our destination's address and couldn't recall the number of days we were staying. The sole sales pitch we received was so unintrusive we couldn't really call it a pitch, and we were neither harassed nor followed by any taxi drivers—one of the primary roots of the hostility we'd inadvertently adopted in Sri Lanka.

However, we were also struck by several large, all-caps signs that marked the following items as prohibited:
So depending on the mood of customs, had our bags been searched and had something like a Bible or a small Buddha statue been found, they would have been confiscated and possibly destroyed.

There's a reason I state that the paradisaical portraits of rich, tan, blonde honeymooners in eternity pools is a striking contrast to the reality of Maldives:
But contrary to the picture drawn from my bulletpoints, the locals we met were some of the most generous, hospitable, easygoing individuals I've ever encountered. The friends we made spoke openly and frankly about their country—whether it was the youth drug problem in Male or the public resistance to initiatives to end gender-based violence. And though Kady and I may have felt a bit exposed with our hair falling around our shoulders and our v-necklines and short sleeves, we were nothing but welcomed:

“It's fine,” they said of our swimming attire, which was still several inches shy of “regulation.”

“You two don't fit any American stereotypes,” said the nephew of our host.

The Republic of Maldives is made up of 26 atolls that contain more than 1100 coral islands. There are around 200 inhabited islands. These islands are home to both natives and expats, and all of the Islam-based laws I mentioned are strictly enforced. A large number of islands are uninhabited; they are either tiny sandbars or used for things like agriculture or manufacturing. The remaining islands are resorts: an entire island that is self-functioning with its own accommodations, restaurants, water supply and more. On these islands, women are allowed to wear bikinis, and alcohol is available.

I forgot to ask about bacon...

These islands are owned by all sorts—from the Four Seasons to some weird Texan I kept hearing about—and rooms run anywhere from $80 to several thousand dollars a night. And though the staff is made up mostly of native Maldivians, many of the resorts do not allow locals to visit as guests. I was horrified when I learned this. My dinner companion (and informant), a professional 30-year-old native-Maldivian woman who does not wear the hijab, finds it as upsetting as I do.

However, another local who actually works as head of a department for one of the resorts the rich Texan owns said he thinks it's the way it should be. “Guests are on a holiday of a lifetime, and they need to feel comfortable—to have the freedom to drink alcohol and wear bikinis,” he said, making it the one-hundredth time I heard a grown man in Maldives say the phrase “wear bikinis.” “You cannot have Maldivians going around and getting offended or asking guests, ‘Can you please cover up?’”

I asked him if he found it offensive or terribly oppressive to have to see women in bikinis. “No, I love it!” he managed to exclaim with the innocence of a 10-year-old boy.

On Gaafaru in particular, Kady and I never quite grew accustomed to the image of women in long black dresses and hijabs standing amid the tropical scenery. 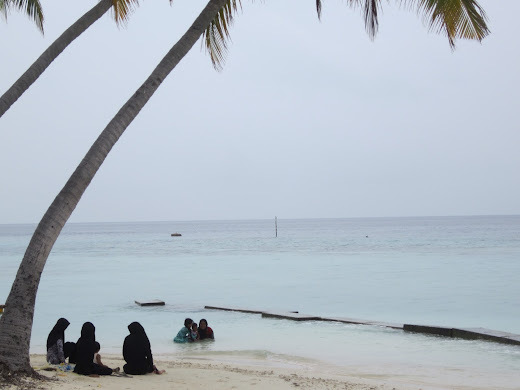 Our young host on Gaafaru, Mifu, said that women began dressing more and more this way after the tsunami of 2005—an event many saw as an act of God and referred to as “judgment day.” But at the same time, he said that for most, it was a fashion statement: “Makes you look thin,” he said.

Let me be honest: Sure, I am a tolerant and open-minded person (perhaps a bit of a, dare I say, relativist) but I struggle with my prejudices and assumptions just like any other. I could swim in a sea of burkas for a year, but I will still find the garb startling and fight the presumption that the burka-clad woman is being mistreated at home. That's on me. That is my bias with which I struggle.


Contradictorily, I am the enduring champion of the underdog. When I'm in the United States, the Muslim population is the underdog, and I recoil at the ignorance that inundates them (“Keep those terrorists out of our country!”). I am repulsed when their freedom to worship in their way is challenged—huge communities rallying together to protest the building of mosques, etc., and I feel embarrassed by what can only be described as prejudiced, anti-Muslim propaganda—no matter how subtle.

But then it would strike me: here I am in a country where it is illegal for me to worship the way I worship. Where I enjoyed prawns seaside with a local Maldivian woman who works as an attorney while she interpreted a nearby rally that Kady and I found infinitely unsettling. Speaking was a man with a long white beard, commanding gesticulations and abrasive, halting speech. “The west is evil, blah blah blah,” said our attorney friend, waving her hand through the air and rolling her eyes. She told us of a parliament member who recently made the public statement that women should stay home. “Psh, I think he can stay at home,” she said.

Recognizing our unease as we tugged at our short sleeves and checked our necklines, she said, “You two never have to worry. Tourists are too important and everyone in Maldives knows that.” I found myself wondering what would meet a group of Muslim tourists in a place like Destin, Florida. (Also, did you read the 40 lashes bit up top?)

Kady and I had pinched our pennies to save for a few nights on one of the islands where we could really kick back...really relax and let it all hang out. Within a half hour of arriving I realized all the beer in the cooler was nonalcoholic and saw this sign: 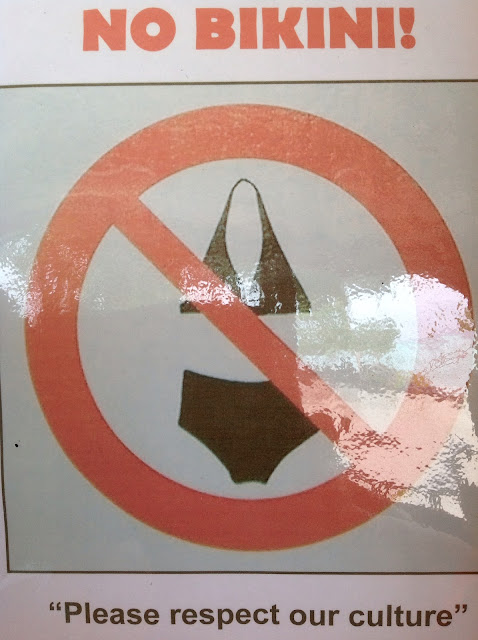 “We...picked the wrong island,” I muttered to the waiter. I mean I haven't worn a two-piece in public since I was a toddler, but I'd been fantasizing about a gin and tonic for a week.

The next morning, I ate my free continental breakfast—eggs a bit too runny with a side of what can only be described as hot dogs (of the non-pork variety, of course). I looked out over the ocean and spotted three or four big ol' blatantly white thong butts—irreverent flesh taunting the rules' enforcers. Mildly repulsed at the display, my mouth curled into a frown. And there I was once again—taken aback by a jarring juxtaposition and swimming in a sea of my own prejudices and assumptions.
Posted by Hobo Siren