The First Time I Saw the Eiffel Tower

Parliament in Budapest--the first time I saw a building so ridiculous.

I cried like a big dumb baby when I looked out at the Adriatic Sea from my bus in Croatia.
I decided on that first solo trip abroad that that was the thing I was just super into: visiting foreign places I'd never been / seeing things I'd never seen. I have of course learned that it's rather frustrating and confounding to try and explain this pastime that may seem decadent or ridiculous to others. I imagine it would be similar for a skateboarder or golfer to try and explain why they're just so super into skateboarding or golfing to someone who thinks skateboarding or golfing is dumb or expensive or dangerous. I don't know man--I just think it rules, okay?
You don't have to leave the country to do this thing I like to do, especially if you live in the US, which is the size of a whole bunch of countries; I had the same wide-eyed reaction when driving through the desert for the first time on my way to Arizon and when getting out of my car in the middle of the French Quarter in New Orleans (visiting as a kid doesn't count) for the first time.
When I got off the plane in Paris, I stopped in the bathroom to freshen up so I could put my best American-in-Paris face forward and have a moment of reprieve before attacking the customs line. Except there was no customs line. No, really. There were just a few uniforms standing around chatting. I presented my best American-in-Paris face along with my passport. They stamped my passport and handed it back with a simple, "Merci." I shuffled along sort of stunned, looking for the real customs, but that was it; I was in Paris with nary a "raison de la visite?"
I spent an undue amount of time trying to take the budget route to my not-so-budget hotel (a tiny Paris budget hotel costs $120; it is a much smaller version of a hotel that would cost $45 in a city like Denver or Kansas City; I had cheaper communal sleeping arrangements set up but I had a terrible head cold and could not impose it {and the snoring and coughing that accompanied it} on others).
Because of my cold and my sheer need for sleep, I did not see any of the major Paris landmarks until last night. (I don't think accidentally walking past the Moulin Rouge and the cafe from Emilie count.) But last night--my last night in Paris--I saw, among other things, both the Arc de Triomphe (do Americans say 'arc de triumph'?) and the Eiffel Tower. The arc was, dare I say, majestic. Enormous. Cloaked in this surreal golden light and surrounded by a frantic sea of chaos--tiny cars maneuvering like magnetized video footage of red blood cells traveling through veins. I mean it's really ridiculous.
Then around the corner, there it was. I had thought a lot about seeing it, and I had decided that it was truly too iconic to live up to the hype. Like the first time you see a celebrity and you realize they're kind of a normal-looking really short person. I set my expections low to avoid disappointment.
But the Eiffel Tower totally Inception'd me.
It blew my mind. 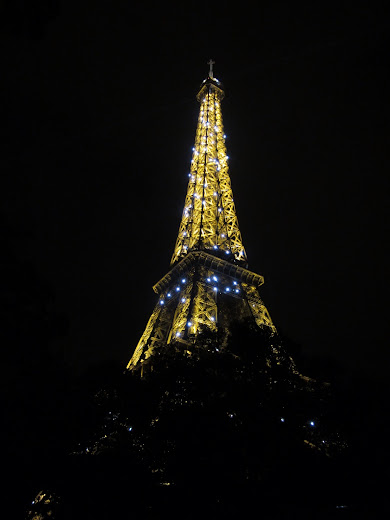 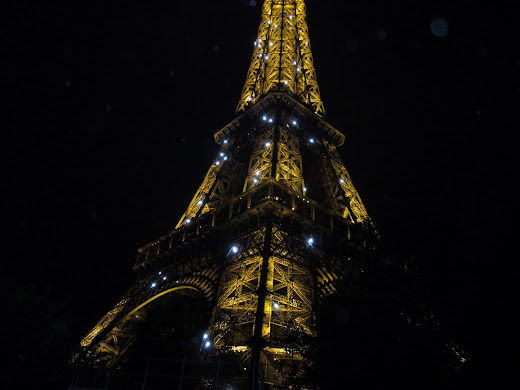 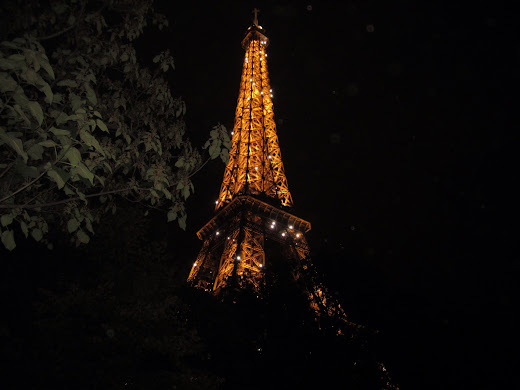 And at the same time it broke my heart. Because I can never relive that first time I saw it.
I return to Paris at the end of my journey and I'll see it again. This time accompanied by the fresh eyes of my sister. I hope--I mean I really hope--to have the same sincere and nerdy reaction the second time I see it. After all, I saw Inception two days in a row and the second time also totally. blew. my. mind.
*obviously there are sadder things in the world; don't be a dummy.
Posted by Hobo Siren