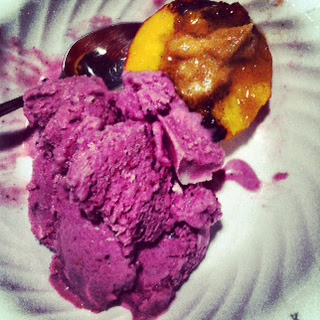 Cooking has always made sense. Baking is another story. So I've always felt a little handicapped in the dessert department and opted for inventing delicious cocktails instead. But I think I've discovered a way to marry the worlds of cooking, cocktails and dessert—and there is nary an oven in site.

The nice thing about making homemade yogurt or ice cream is you have a pretty good idea of what the mixture will taste like when it's frozen. So, like cooking, you can sort of sample the flavor as you go (versus baking where the actual magic happens in the oven and out of your control).

Here is what we threw together over Girls' Weekend:

Mix all of these ingredients in a large bowl with a wooden spoon.

I cooked about a cup of blueberries with several tablespoons of sugar and enough water to reduce the blueberries to a jam-like consistency. Set aside to cool.

Pour the ice-cream mixture into an ice-cream maker and let it do its thing. This mixture took a long time to freeze, probably because of the vodka.

When the frozen yogurt was set, I added the blueberry mixture. It was supposed to swirl in but that was a little out of my league.

No matter. It was delicious and we served it with grilled peaches. And accidentally to fifteen-year-olds.

Here are some other flavors I would like to try before the summer is over: