From the Archives: JFK to Tokyo

In honor of some very exciting news, here's an old travel day story...

There is something delicious about stowing luggage, sitting, making the polite formal nod to your seat partner, clicking the belt and taking off. As if you just somehow beat the system. (I’ll show you two hours early…)

My short jaunt to JFK was spent entertained by the conversation going on behind me: A loud man practiced in the art of feigned extemporaneity (he knew exactly where to insert the proper stutters and pauses in phrases such as ”…surf the waves of human uncertainty” to create the illusion that this was, just now, truly the first time he’d ever uttered this self-indulgent dribble of a monologue) and a polite man trained at the art of camouflaging irritation with pleasant indifference. His gift for polite vagueness was astounding (“hmmm… I have not formulated an opinion on this… hmmm…I’ve never thought of it that way…that certainly is some food for thought… how interesting… I must put some more thought into that…”).

The five hour layover at JFK went by faster than expected. Boarding the flight for Tokyo, I tried to wrap my exhausted mind around what was about to happen. I was about to embark upon 13 hours of suspended reality. SMc, having made this transcontinental journey a few times now had offered this as preparation: “You’ll be walking around the cabin and you’ll look at the people in their seats and out the window and you’ll think that this is forever. Yes, this is really happening and this is… going to be reality… forever.”

I tried to contemplate the thirteen hours. I compared it to some of the fourteen hour days I have worked in order to prepare for this and I thought--easy. Breezy, even. I started my first movie and sipped my first glass of wine and later woke up. I had no idea what time it was. Time had ceased to exist.

I sat next to two young girls of ambiguous Asian descent who were just two geese in a large gaggle of young teen-aged students who had been in NYC for some sort of contest they took “silver” in. They were from an island near Guam. They liked my name and hair and eyes and were jealous of my destination. I contemplated myself through their eyes and felt, well, pretty awesome. Then I started films and awoke to the final credits and time continued… to not exist. At least once every two or three hours, I found myself guilty and in a quandary (my front to their face or my back to their face?) as I stepped over and squeezed past these sleeping girls who had kept themselves awake all night drinking coffee for the first time. Then satisfied and back in my seat, concerned and maternal at their lack of visits to the bathroom.

So I slept and watched films and slept and time ceased to exist.
Landing at the Tokyo airport, I wandered to the nearest restroom in a cloudy daze trying to wrap my mind around the fact that I was in freakin Tokyo and found myself in another restroom quandary--negotiating the definition of this sign. 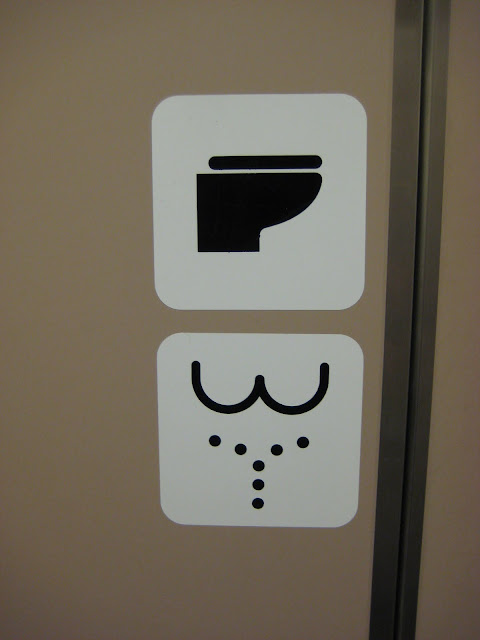 Email ThisBlogThis!Share to TwitterShare to FacebookShare to Pinterest
Labels: From the Archives, On the Road