I've leased six months of my life to this apartment and have so far painlessly passed three and a half of those months here.

A lot can happen in three and a half months. It's enough time to:

I don't know if you've noticed this, but I tend to move often. My poor little Edie turned five yesterday and she has lived in thirteen dwellings. That's 2.88 dwellings per pound! Because of this nomadic existence, I tend to not settle in too throughly. I couldn't tell you the last time I hung art or painted or bought more than a six-pack of toilet paper. But tonight, I made a big commitment.

I leased fifteen minutes of my life to repeatedly stepping on a plastic pump and inflating this rubber, pill-shaped thing. 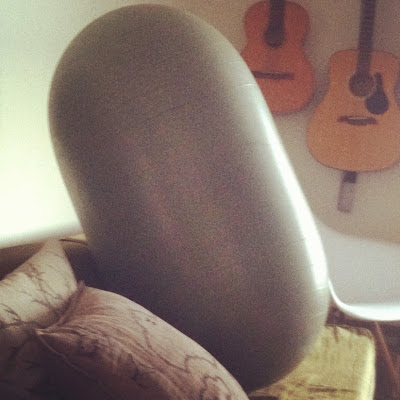 What is it? Psh. Wouldn't you like to know. No I'll definitely tell you: it's an exercise ball. It's shaped this way because of something called marketing.

It takes fifteen minutes to inflate and about four minutes to deflate, so why do I view its inflated state as such an enormous commitment-statement? It can't weigh more than 2.5 lbs. So why does it feel like an anchor tied to my ankle.

What are the silly, awesome or downright strange ways you claim your nest... or your freedom?