Is This Some Sort of Epidemic or Something?

When I DON'T get hit on:
When I DO get hit on:
The first time it happened was when I was living in St. Paul. I was sick as a dog. I draped myself in a down coat, pulled my greasy, frizzy hair into a ponytail, put on my glasses, shoved my sweatpants into UGGS before they were stylish, and ventured outdoors to pick up some take-out and DVDs.

After selecting my films, I staggered into the record store next door. Out of the corner of my eye, I saw a man do a double-take in my direction. I looked towards the man to ensure he wasn't looking at snot-faced me. His triple-take declared that he was indeed. You've got to be kidding me, I thought.

I stationed myself at a used-CD bin a safe distance from the man with the homeless-lady-fetish and began fanning through the albums... click—click—click...
I felt his head nervously twitching in my direction as he conspicuously closed the gap between us. Don't you dare—the thought turned my scowl into a grimace—don't you even dare.

In my peripheral, I saw his mouth opening and closing hesitantly, as his body sort of jerked towards me, trying to get my attention. I gave up, abruptly shoved my stack of CDs into place, and looked him square in the face. "What?" I asked with uncharacteristic hostility.

"You look so much like my sister! I mean..." he said while shaking his head in convincing disbelief,"... I can't believe how much you look like my sister!" My shoulders relaxed. I laughed a sigh of relief.

"Oh wow. Really?" I said, not actually asking a question. And that was enough dialogue for me.

"I mean, it's insane how much you look like her!"

I looked up and sort of nodded sympathetically, but with no evidence of friendliness.

"God you look like her!" We had an audience at this point.

"That's so funny," I offered half-heartedly, mildly intrigued by how much I must indeed look like his sister. I mean this guy was about to have a heart attack over it. I smiled, then looked away to indicate the exchange was over. Feigning keen interest in the album selection, I shuffled my way a good six feet from him. He followed.

"I mean WOW... it's incredible. I can't even believe it! It's just... wow!" Our audience was greatly intrigued by our performance at this point: me, retreating curtly, and he, following uncouthly.

I exaggerated my inconvenience with a huff and answered, "Uhm... like English and Irish?" I looked at him expectantly.

I heard a chuckle a few feet behind me. My jaw dropped and I let it hang there as I studied him in disbelief. "Well, no... no I'm not single. I... I definitely have a boyfriend," I said, telling the lie I would have told seven minutes earlier had I thought someone intending to ask me out would actually open with, "You look just like my sister!"

"Oh, ha...the good looking ones are never single. Are you sure? It's serious? I mean I could give you my number in case..." 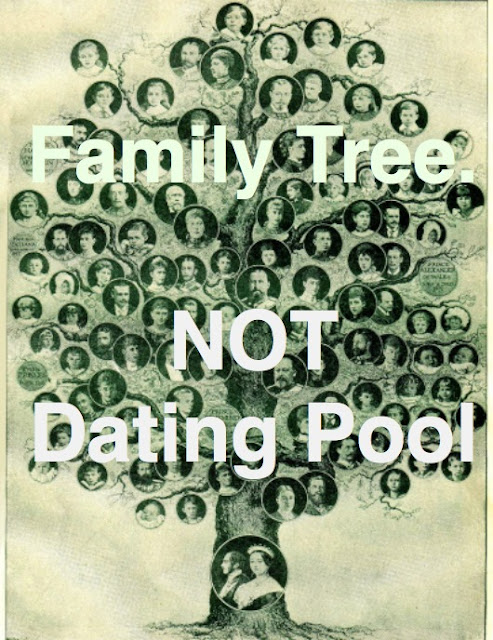 A few years later, in the summer of 2011, I was, as per my custom, walking the 150 feet home from the cafe across the street in half-pajamas—cappuccino  and pastry in hand. Passing Treehouse Records, I saw a flash in the window out of the corner of my eye. I kept walking until I felt the footsteps behind me. Tightening my grip on my purse and hesitantly turning my face about fifteen degrees, I saw a man with silver hair. He was deeply tanned, between the ages of 48 and 55, and dressed in something that said, "I'm on a boat and dressed very, very casually." But we weren't on a boat; we were on a sidewalk ten feet from the alley I would walk down to enter my home.

"You look so much like my sister! I mean..." he said while shaking his head in convincing disbelief,"... I can't believe how much you look like my sister!"

"I mean, it's insane how much you look like her!"

"Uh huh," I said, knowing what would come next.

"Yup, I'm just English," I said. I began walking down my alley. There are rules when pretending you are going the same direction as someone in order to have a conversation. Mostly, the rule is you don't follow them down an alley.

I cut him off.

"Oh, thanks, but I have a boyfriend," I lied again as my body language said, in the strongest and loudest means possible, leave me alone. Stop talking to me. Stop following me.

"Oh ok," he had followed me 15 feet down my alley at this point. "So is it like a serious, committed relationship?"

Yes, we are deeply in love; he looks just like my brother.