I was staying in a Holiday Inn in Birmingham, Michigan for a quick job in mid-January, 2012. Saturday night around 2:00 a.m., I got the following text:

As you can see (I'm the green bubble), I had questions regarding the origins of this text, but the reply hardly sated my curiosity.

Ohhh... obviously, whatever spam-bot was sending me this text was glitching out, so I replied what you're supposed to reply when you're getting text-spammed.

Then something a little unexpected happened.

This Terry person obviously had the wrong number, but as I pressed "send" on my query...

A vague memory popped up.

Air Conditioner Terry is the guy I found on craigslist when I discovered I was moving to New Orleans last August and decided it was worth the $100 to get my air conditioner repaired on my 1996 Volvo wagon. He was apparently excited by my recollection, as you can see by the fact that he forgot the "A" on his all-caps "YEH!"...

but I was unconvinced that he had done more than cast an inebriated net out into the text-ocean at 2:00 a.m. on a Saturday night.

Back in August, his craigslist ad had caught my attention because his price for an A/C recharge was a mere $50, plus the cost of the coolant (a not so cool $16 a can). I pulled into the alley behind his house in North Minneapolis and exited my car with feigned confidence, as if to say, sure, I obviously meet strange men off craigslist in back alleys in North Minneapolis all the time. Silently observing five gang members with prison tattoos unload an engine off of a pick-up truck, I thought to myself, yeah, this is the sort of thing I will leave out of my next conversation with, well... anyone who cares about me.

That Saturday night, despite the hour, Terry appeared to be cognizant of who he was texting.

What you might not be able to tell from this interesting detail he included is that my air conditioner was never actually fixed. Because, as if I was driving around throwing 20-dollar bills into the streets, what ended up being more than $100 of Freon leaked out into the universe through said hole during our trial&error A/C repair sessions.

I called him after repair session #1 had failed. He applied an epoxy over the hole in the condenser and told me to come back the next day. "I won't charge you anything," he said. "Just pick up more coolant and a pack of Marlboro Reds for me." When I showed up at his place the next day after the epoxy had set, the following conversation occurred:

"Listen, I know I said I wouldn't charge you anything to add this Freon, but the thing is... (really long explanation about some check he was supposed to get)... I could really use like 20 bucks just for Coke and cigarettes. You could apply it as a credit to any future work I do on your car."

"Man, I seriously don't even have 20 bucks to pull out of my checking account. I could write you a check, but you'd have to wait a couple days to cash it."

"Yeah, that wouldn't really do me any good."

"I'm really sorry. All I have is a credit card."

We stood in the street with the hood of my car open. I looked at my feet, embarrassed for the both of us. For myself because I didn't have $20 in my checking account and for him, a tall scraggly man at least ten years older than me, because he was desperate for a $20 loan. In the end, he devised the sad plan for me to drive him to a Holiday station (this mechanic didn't have a car) and purchase a $20 Holiday Station gift card... so he could buy his Coke and cigarettes at the gas station until that check came through.

Which is so much worse. Right?

The next morning, I was too busy oversleeping and missing my flight from Detroit to Minneapolis when the next batch arrived: 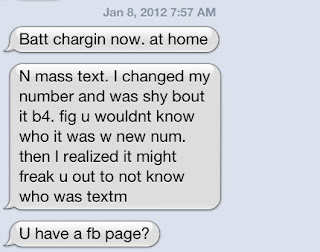 A little over an our later, his final message was bittersweet: 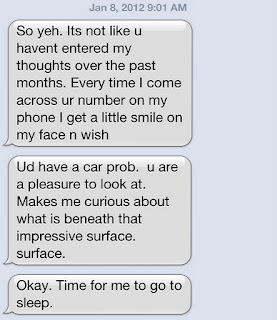 Then he offered me his full name in the event that I desired to friend him on "fb." 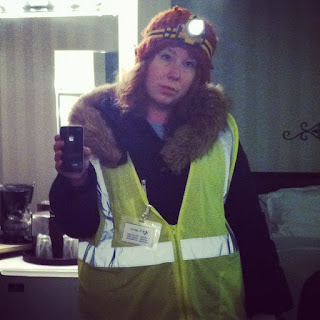 Wait, am I doing this right?
Posted by Hobo Siren