As is usually the case, I didn't leave "home" until close to 6 p.m. I had stopped at the grocery store for some road snacks, but due to pressure from both my personal sentiment and my Safeway membership discount card, I ended up not  with almonds, string cheese and apples as I had been planning but with a bottle of tequila, two pints of Arrogant Bastard Ale and six candy bars.

I made it to Flagstaff, AZ. This is the town outside of the south rim of the Grand Canyon where Kady and I had spent the night in a Walmart parking lot. Not the night where we awoke next to the Christmas tree display with the dread-locked man peering in on us asking his friend, "What? They move in?" when he spotted a blonde and a redhead bundled up in the back of a Ford Edge (Kady and I both genuinely believed he couldnt see us if we had our eyes closed). This is also not to be confused with the parking lot of the Target that housed the sink Kady washed her hair in while the concerned old lady asked if there was anything she could do to help then wished her a "safe and happy life" as she exited.

No, this was the Walmart where a drunk homeless man who didn't speak English accosted me around 1 a.m. while I stood in my sweat-pant capris with an eye mask around my neck coaxing my poor sick chihuahua to try and go potty. "Please go away," I said politely. It was the most assertive thing I've ever said.

I made it to the Aspen Inn a little after 10 p.m. I was upgraded to the "Executive King Business Suite," but no fancy title could disguise the fact that it was 58 degrees Fahrenheit in that room, and the king size bed made it impossible to close the door to the bedroom. As usual, I had selected a hotel that was "dog friendly," but I did not "declare" my dog. It's just more exciting to sneak her in.

Checking in, I asked, "What time is the free breakfast buffet 'til?" as if I've ever in my entire life gotten up in time for a hotel breakfast.

Sunday morning, I missed the hot buffet and was on the road around 11 a.m. I had concocted a more-scenic and less-obvious route from Arizona to Minnesota in order to drive through three places I'd never been:
But one doesn't make incredible road-trip time when their mind is constantly being blown by sights like this: 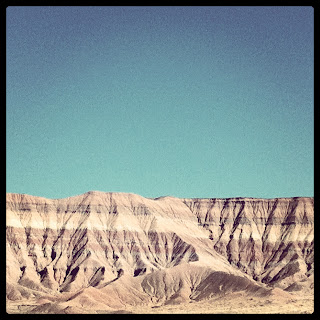 After pulling over for the fourth time to stand gawking and astonished at the view, I made myself a promise to keep driving. How would I ever make it to Minnesota at this pace?

I was about 90 miles from Four Corners when I realized I was only 18 miles from the Utah border. Another detour was in order. As I approached the border, it became apparent that I was accidentally traveling towards Monument Valley.

I recently found myself wondering about the ethics of adding a task I've already accomplished to my to-do list, just so I can cross it off. The only conclusion I've arrived at is that I'm adding and crossing this off all of my lists and I suggest you add it to your list if you've never been. 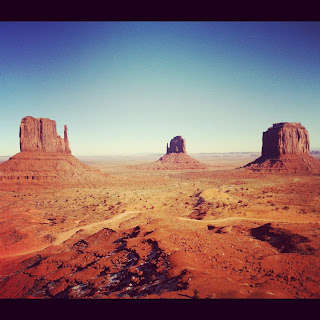 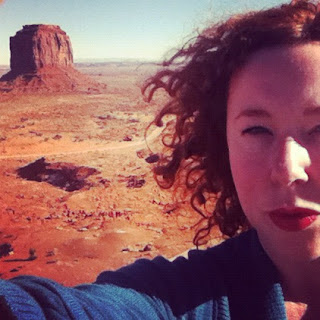 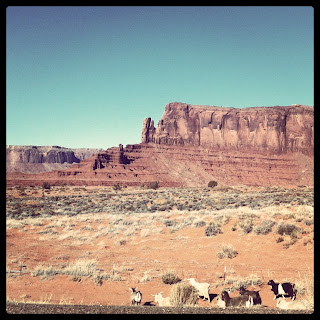 Four Corners would surely pale in comparison,  but the Navajo Nation Department of Parks and Recreation made things a little more exciting by closing the park down for Christmas Day. Usually this would have left me dejected and depressed, but today I was on fire. So I sent Edie through an opening in the barbed-wire fence, and she unlocked the gate. 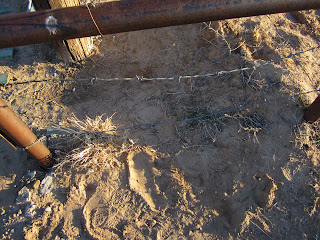 Actually, there was plenty of room so I just crawled under, but not without snagging my sweater on the barbed wire. (I get it, fence; that's your job.) I broke one more law as I snapped this photo about 15 feet away from the "Dogs Prohibited" sign:

I'm not usually such a flagrant outlaw, but today was a different kind of day.

Driving through the painted desert with a full soul and a fitting soundtrack...

I thought to myself that I could be anywhere in the world; the landscape is completely unmarred by any outside influence.

Man, I was badass that day. Email ThisBlogThis!Share to TwitterShare to FacebookShare to Pinterest
Labels: Guh, I'll show YOU Culture, On the Road