As I've explained before, the water meters our team installs are housed in pits buried in the ground and are protected by flat metal lids.

You've seen the video that explains hop-popping-- the part of our job where we pick up the lids.


We pick these up so we can pile them in our car and drive them ten miles away down a terrifying alley in the creep-ital (stay tuned for Saturday's just-now-created-accidental-hybrid-neologism) of Arizona. Here, at an un-google-able metal shop, our company pays a tall blonde man to drill a two-inch hole that allows a radio antennae to peek out (yaaaaawn).

Sharing an alley with our potty-mouthed metal-shop is a junk yard belonging to an old decrepit man whose presence cues "Dueling Banjos" from Deliverance.

The best/worst/weirdest/most exciting/disturbing part of our bi-weekly visit is looking at the scary old man from Deliverance's spray-painted message (which I have discreetly censored) on this rusting train car dumpster. 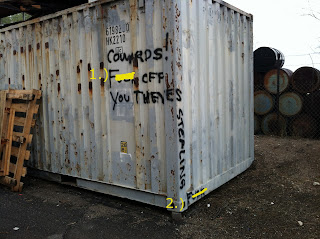 So here's what I can gather based on the evidence:
But here's what is so impressive: Have you ever used spray paint to write something? It is hard! And exhausting. Imagine how maniacally angry an 80 year old man has to be to use that type of language and then, even after running out of space... TWICE... still be angry enough to use it again. I don't think I've ever been mad enough to put that sort of effort into anything. I threw a phone once, but it was in my hand and therefore impeccably convenient. If I had had two phones, I definitely would have run out of steam after throwing the first and the second phone would have been completely safe. This guy, on the other hand, had to:
ALL WHILE BEING 80+ YEARS OLD!
Have you ever been that mad?
Posted by Hobo Siren