Thailand is famous for their massage technique. Also famous- their affordability. I had seen, with my own eyes, the price of 150 baht (5 USD) for an hour long massage.
When I was checking into my hotel, a woman of vague "Western"-descent was returning from a spa-complex near the Grand Palace. This, she said, is where you wanted to get a massage. She had a sweaty upper lip and looked like the stereotype of a single 65 year old woman who visits Thailand every year.
When she told me the prices for their "herb" massage and this one and that one, I said, "oh, I can't afford that." To which she responded, "Then you can't afford any Thai massage." Man, this made me bristle. She went on to explain that most of the "practitioners" in Thailand had no formal training. "Perhaps someone gave them a book they paged through," she said.
I thought- blah blah blah Lady. It's FIVE dollars.
She then declared that she had taken a three week course on Thai massage. From my point of view, she might as well have said- oh, the Thai people serving food all over Thailand aren't serving real Thai food. I should know; I took a community ed class.
I ended up wandering the streets to the market nearby where I was quickly overwhelmed by the, uh, authenticity. 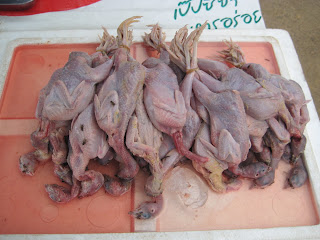 However, determined to see the things the Thai see, do the things the Thai do, taste the tastes the Thai taste, I set to deciding upon a meal.
I was a pale-faced red-haired spectacle as I rambled aimlessly for a few laps. I resigned to something edible on a stick that could be pointed at and as I ate it my stomach turned a little, recalling the sights I'd seen and recalling some rather valid travel advice- make sure you see them prepare your food as you have no idea how long it's been sitting out.
I walked past a massage place three or four times, trying to catch a peek of the process and work up the nerve to enter. It's pretty intimidating to take your shoes off and walk into a place where everyone will turn and stare at you and your only medium for communication will be "pointing".
So finally, I left my 85 dollar Clark's outside on a crowded sidewalk and entered as 12 Thai heads turned in unison and stared. Pointing commenced and within four minutes I had changed into lounge-y fisherman-style pants (Thai massage is fully clothed) and was in a chair having my feet washed.
Daily in Thailand, Kady and I experienced a phenomenon neither of us could ever adjust to. Because we just can't quite get used to strangers laughing at us. Thailand is nicknamed "Land of Smiles" and they are known to be a hospitable people who like tourists. So I try to not take it personally when they stare at us and laugh. But... it's pretty unnerving.
My "practitioner" rolled up the droopy-drawers-on-loan while a woman hovering nearby watching this process said something while pointing at my legs. They both laughed.
Throughout the massage, any number of the workers would look at me, say something to one of their colleagues, then giggle. I started asking them what they were saying or laughing about- I mean, shouting this seemingly rhetorical question--- "what are you laughing at!?"--- at the whole lot of them. But they didn't speak English and this just made them laugh harder.
At one point, a worker took a picture of me with her camera phone... All while I am being massaged...
She looked at the photo and laughed.
When I was in Croatia a couple of years ago (I hate myself for starting this paragraph that way), I was crippled by the fear of over-exposing my American-ness or just... doing something "wrong". Doing anything that said, "you're right, I have no right being here". I went to a restaurant and they directed me to pick a table. I stood paralyzed, terrified of picking the wrong table. There I was in a restaurant full of empty tables and I was worried I would pick the wrong one. Of course this was a ridiculous fear, right? So I picked a table. I sat down, they brought me a breadbasket, and as I worked on conquering the terror that arose as I was trying to decipher whether or not I was allowed to eat the bread, the man who had told me to pick a table... moved me to a different table. BECAUSE I HAD PICKED THE WRONG TABLE.
This is how I felt my entire Thai massage. I was  a spectacle with an audience watching my every move and responding with giddy glee at my every foible. Did you know it was possible to do such a bad job receiving a massage?
When Kady and I went roaming around Bangkok her second night in town and stumbled upon an affordable massage place, I suppose I felt emboldened by her presence and determined to give Thai massage another try. We were indiscriminately assigned "practitioners" and lied down next to one another on mats in the dark. My therapist started five minutes after Kady's, finished three minutes earlier, left for unexplained reasons at least three times during my massage and, honestly-truly-seriously... FELL ASLEEP NO LESS THAN THREE TIMES. She would be rubbing an area. The pressure would get lighter and lighter and lighter. Until all motion ceased and she was snoring.
Kady appraised her massage as "Fantastic." I was right there watching it and I believe her. Hers seemed to be pretty fantastic. I wasn't sure which I found more upset- the fact that the 65 year old woman was correct or how bad my massage was.
Maybe I'll give it another try in Malaysia I thought...