The most amazing rest-stop in the United States is in Blytheville, AR. Well, I guess it's actually a Welcome Center. 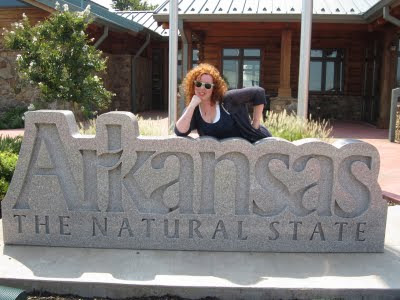 It looked and smelled like a freshly built cedar cabin and the air conditioning was frigid.


Here, we were asked where we were from by a woman (whose job it is to do this) who wrote "Minneapolis" on her clipboard. I felt the need to explain to her that I had lived in Little Rock (Arkansas) and that my father currently lives in Northwest Arkansas and that I was presently en route to New Orleans, but was born in Lake Charles, Louisiana.

It's like I'm a politician who's trying to convince you I'm just like you. I'm totally one of you. I'm absolutely that guy you want to have a beer with. I did this constantly when I was an insurance agent in rural Minnesota- a place I knew absolutely nothing about.

The thing is, say you're a tree—well, your roots are pretty permanent. Your branches, well, they go wherever, right? Wait a second... am I the tree? Whoa whoa whoa. Whooooo am I?

Well I was born in Lake Charles, Louisiana. I have some fuzzy memories about being there. Then it was Texarkana, Texas. Holland was born here and this is where I had that Fraggle Rock nightmare. Next was Nashville, Tennessee. Benjamin was born here. I remember seeing a beautiful blonde woman at Grand Ole' Opry who was introduced as "Dolly Parton's sister" and thinking.... how sad. Then was Marietta, Georgia right outside of Atlanta. I started school here. After this was North Little Rock, Arkansas. Clinton was governor and I remember spotting him at Razorback games (my uncle was head offensive-line coach). I was a gymnast. I won a trophy in the butterfly stroke on swim team, which was particularly impressive since I've never learned how to do the butterfly stroke to this day. I was bussed from the white people part of town to the black school and some black kids from the black side of town were bussed to the white school.

By the time I was nine years old, I was moving to my sixth state—Minnesota. For good measure, I'll throw in Vermont. Then it's back to Minnesota, and life comes full circle as I'm roasting at present in New Orleans, Louisiana.