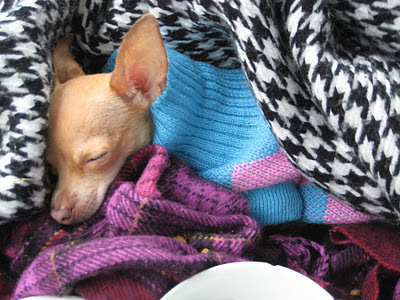 After only a couple hours of sleep on my way back to Vermont, I decided to really take it easy. I had about 840 miles to drive. So I got an oil change and a fancy espresso beverage and mulled around Target. I was a good hundred and ten miles into the day when I realized I was, once again headed towards Canada. I wasn't really in the mood for Canada being that the last time I drove through, I managed to rack up $140 in roaming charges.
I reached for my passport.. in that spot where I keep my passport. Blindly, I fingered through some photos and receipts.
No passport.
Exiting in order to search some potential passport locations, I replayed the scene from the day before: I watched myself cleaning out my car. I watched my hands grab a stack of trash- mostly client "report cards" for the job I have unofficially resigned from. I saw myself walk to the trash-can out back. I saw myself open it. And throw away a passport sandwich.

I recalculated my route, thus buying myself an additional 170 miles of driving which would no doubt translate into an additional night in a hotel. Realizing this, a unique breed of rage coursed through my veins. That, mixed with the heavy weight of melancholy only true failures are privy to, had more of a numbing effect than anything. I would make it to Buffalo. I would have a real meal. I would have a cocktail and I would get to bed before 5 in the morning. It might even be closer to midnight.

Somehow ending up at Applebee's, I berated myself for the selection. This was the one time in my life that I had actually decided to eat at Applebee's. One can only imagine the limited options I must have had. But, still...

I drove the 80 or so more miles to the Days Inn at the Buffalo hotel I had asked my mom to book for me. She claimed this was the cheapest one that was not really scary and I was grateful enough.
It was just after midnight when I checked in. But the hotel was called "Days Hotel" not "Days Inn". So I was hesitant as I approached the unfortunate-looking mid-40s redheaded man at the front desk.

I liked this very much.

He asked me what brought me to Buffalo and I resisted the urge to say "this hotel," and was generally very appreciative of the interaction. Until I got to my room. I had sneaked Edie in via duffel bag. And any guilt that would usually tingle just a little bit for doing something like this was quickly extinguished upon entering the room. It's really difficult to put your finger on it- why a room like this causes discomfort and ill-at-ease-ness. There isn't this one particular item or flaw that can adequately serve as scapegoat for the only very faint and mild sense of dread you feel in your stomach.

More than anything, I questioned the choice of placing motion-activated lights in the main entry-way . I also questioned what would make the cleaning lady decide to noisily clean the surrounding rooms at one am- cart banging and mirrored sliding closet doors slamming. I went down one level to "vending" to buy a water. Even the price of a water bottle was menacing.

I could go on about how people have definitely been murdered in this hotel or at least serial killers have stayed here after murdering people, but I'm worried my mom will someday discover my blog and it will hurt her feelings since she booked the room for me when I was on the road.

I fell asleep and slept hard. Now most of you know by now that Edie, nearing her third year, has learned to bark. Typically, she does this when one of two things happens: a man that is either tall, wearing a hat, or of non-Caucasian descent is in her presence... and when someone knocks on the door. Having not set my alarm, I was awoken to knocking at my door. Which woke Edie up and caused her to bark. My natural reaction was to cough. Very loudly. To disguise the barking. To which you will all reply: yes, but of course.

After being scolded by a woman holding a clipboard, whom I spoke to through a tiny crack in my door who would have gotten a piece of my mind had I not been coughing in an attempt to muffle Edie's tiny barks, for NOT asking for a late check-out, CALLING the front-desk and ASKING for a late check-out and then getting dressed in a haze, I took a twenty five mile detour and drove through Niagara falls, which I've been spelling wrong my entire life (and that, Friends, is a run-on sentence). Niagara, not Niagra Falls is an eerie, eerie ghost town this time of year. And even though I didn't get too close to the main falls since I was freezing and didn't want to leave my car, it was a nice juxtaposition to a hazy confrontation and deceit-covering filled morning.
This day was the most relaxing day I've ever had in my brief career as a professional solo-roadtripper. Much to my dismay and self-loathing, I ended up at T.G.I.Friday's. At least I thought it was T.G.I. Friday's. That's what the sign said, but all of the servers were girls/women between the ages of 18 and 25 and wearing beach attire to include tiny tiny sundresses with bikinis underneath, tiny shorts and tank tops... with bikinis underneath... and other tiny and beach-appropriate apparel. There was a curious smell in this restaurant- a mix of baby-diaper and business-man foot. To my left was a table of 11 or 12 women of various descents ranging in age from 45 to 65. My favorite quote from their evening came from a woman between 60 and 65: "I like Lady Gaga".

I was a mere 15 miles away from Smart Suites and perplexed at my proximity. I had seen no "Welcome to Vermont" sign. My perplexity turned to irritation as I came to discover TomTom had once again navigated me to a ferry. This time, in Essex, New York.
I decided to take a very very wide U-turn. My two front wheels just barely kissed the shoulder. As I put the clutch in to nudge the car into Reverse, the slope of the road caused my car to juuust barely dip over the shoulder, which, in a normal universe would be just fine... except this was early January and there was no backing up. My car was perfectly perpendicular to the road and any oncoming traffic. But this was no problem. Because a car didn't drive past for an entire hour. So I wasted a mere seven minutes or so covering my legs in snow seeing if I might be able to "scrape" some of the snow away from my tires, then called 411 for towing companies in Essex, Vermont. Because that's where I thought I was. The first one answered and announced his price at eighty dollars. When I responded with exasperation at the fee for pulling my car out a mere two or three feet, his response was not this but might has well have been this:"Look Lady, I charge that because I can; you're stuck in a ditch". He said I was welcome to call around, which I did with increased urgency as my phone battery started to beep and I realized I was actually in Essex, New York, NOT Vermont.
One after another, I called tow truck guys who had obviously been sleeping. They all reported that they either didn't run that late or there was another guy closer. I was rejected by five overweight middle-aged sleepy men who no doubt suffer from sleep apnea and then called the police station. Calling 411 to attain this number was difficult as the town I was in was so small, there was no police station.
Finally connected, I tried reeeally hard to be composed. "Hello, my name is Summer Grimes. I'm very embarrassed to be calling you. However, I have been stuck in a ditch for some 45 minutes now and I'm very upset (my voice was cracking dramatically). I'm very embarrassed to be so upset (I was crying now) but I've called five tow truck companies and no one will come get me".
She asked me a series of questions which I was convinced were a test to see if I was a complete lunatic. In retrospect I think they just needed more details in order to find me. It took the sheriff another half hour to arrive. He pulled up behind the very first human to drive past me and ask if I needed assistance. The sheriff was much more docile than I was expecting and I got the feeling he'd just as soon be doing this than the nothing he had going on before. He tried to give me pointers on which way to turn my wheels etc, but just like one hour earlier, I was spinning and stuck. He went to his car to make some calls and a half hour later, an overweight middle-aged sleepy man I had spoken to 45 minutes earlier came and reenacted that scene from Jurassic Park where that guy who plays Newman on Seinfeld is stealing that stuff and hooking that hook to that thing in the rain... He pulled me out of the ditch as I held Edie on the side of the road. I thought this was the climax until I tried to start my car and the battery was dead...

The sheriff went to hold the ferry. The ferry THAT WAS FREE AND RAN ON THE HOUR due to the bridge being blown up and everything.

Two hours after TomTom's original suggestion was made, I pulled onto the ferry as the only other passenger and almost fell asleep as I watched TomTom desperately try to steer me over the water to my final destination. He was trying so hard, recalculating in a frenzy to save me from drowning and get me securely to SmartSuites where I could crawl into that giant bed with my sleeping sister. He was trying so hard, I couldn't even be mad at him.