Travels With Edie: Part I 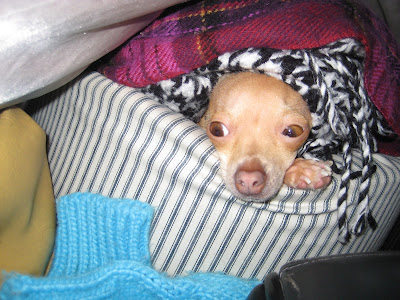 Learning a new skill happens in an arc.  When you first get started, you think, hey, this isn't so hard—though you're actually doing quite poorly. Then, as you gain momentum and your skill increases, you become aware of how awfully you're doing. But you get better. And juuuuust as you start to gain confidence in your abilities, you are met with...not necessarily a plateau so much as a cavernous pit of sucking-at-it-ness all over again.
My first solo roadtrip (by roadtrip I mean more than 450 miles solo) started off with a sanguine and dreamlike euphoria of the most pure and earnest variety. It had taken me too long to pack my car, but the sun was shining at that angle that illuminates every single dead and shriveled piece of grass into glorious gleaming lustrous gold shampoo-commercial hair. I was in love with my new home of Burlington, Vermont.

I had undeservedly beautiful weather, great music and my trusty sidekick in the passenger seat—all ears and eyes and guileless trust and adorableness.

I tapped at TomTom; he asked if I want to avoid tolls; I said yes; 250 miles was added to the route; I assumed it knew best...

I was on my way—rolling through beautiful farm towns that I never would have seen had I not selected "avoid tolls." I had my first 45 minutes perfectly sound tracked, and I couldn't even wipe the grin off my face. Until I arrived at the ferry to New York.


Wow TomTom, you're a real genius. Thanks for helping me avoid a couple of $2 tolls in exchange for a $20 ferry I'll sit on for an hour.

I turned around and recalculated TomTom and was soon headed for the bridge to New York, my chagrin quickly replacing itself with giddy anticipation at the prospect of going over a bridge I'd never been over (what? I like bridges). I drove through tiny towns that looked like sets from movies about underdog southern lawyers helping the underprivileged against all odds. Six miles from the bridge, a sign declared the bridge out of order due to construction. At 2:43 p.m., I drove back past Smart Suites, the extended stay hotel I live in, where my journey began two hours and twenty minutes earlier that day.

The fury fueled me for a good hour. Then, like a post-energy-drink crash, left me exhausted. I slept in a Canadian WalMart parking lot for 30 minutes and got back on the road, double-fisting Starbucks. I drove in a manic frenzy, engrossed in my audio book, growing stupider with every word—as I had accidentally used my free download on the "tarty" book, thinking I could get the "heady" one for $6.95 but then found out the "heady" one was a $35 I could not justify.

At this point, I truly believed I could drive straight though to Minneapolis. I was on fire.

Until I realized I had only downloaded part one of this young adult novel and had accidentally deleted the other contents of the ipod in the process. So I pulled over in a deep depression and slept at a rest stop for three hours.

When I arrived in Minneapolis, I was so delirious that I actually thought I had completed the 1400 miles in 18 hours. I thought this for two more days, which was how long it took me to stop being delirious and remember there are 24 hours in one day and not 12.

I guess I got "dozens" mixed up with "days".
Posted by Hobo Siren