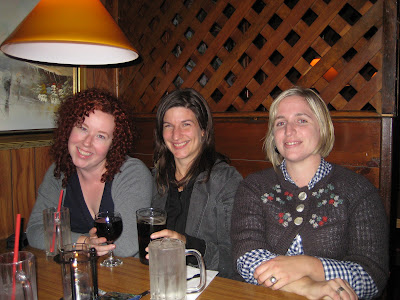 I woke up to take my shift and, while the other girls dozed on and off, I became increasingly agitated. We were heading due north. I had no idea how long we'd been heading north. And we just kept going more and more north!

Stopping at a rest stop...somewhere in somewhere...
my road companion, Beata, perused a large map and said, "I think the route we're on is going to take us through Canada."

I knew I would have trouble crossing into Canada because of what happened the last time. Not really—I was just nervous because I didn't have any of Edie's papers handy, and you need them all to get a dog in or out. Also, a big chunk of our cargo was made up of an African citizen. In short, there was a very good chance we would be turned away at the border and be required to turn around and backtrack underneath all those great lakes now.

We wasted more and more time: we stopped for a leisurely breakfast where the waitresses were concerned about how indirect our route was; we stopped at a gas station where a charming and disarming businessman stranger teased us about how far out of the way we were...

Like a true genius, after six or so hours of anxiety and indigestion, I decided to check the filing box with all of my "file-able" documents and papers that I had, at the very last minute, decided might be a smart thing to bring on my move to Vermont. And I, being the inconsistent, compulsive, fastidious filer that I'm known once every six months or so to be (let's just say you can only watch so much TV while locked up in Prism Research Laboratories), retrieved my file labeled "Edie" and found all necessary documentation.

Bringing the South African into Ontario was pretty exciting for easily excitable people like us. Like a true thrill-seeker, Beata handed the border-control lady the most nominal papers first, waiting to be prompted for further documentation. I like to think that the border-patrol lady's pulse might have quickened ever-so-slightly at the sight of this foreign passport, but then, at the peak of anxiety, at the brink of escalating and intrusive questionings, Beata offered, "Oh, I have my green card." (This bit was just as rewarding getting back into the U.S.)

At this point, it seemed like TomTom(the GPS)'s joke was on us, as we headed straight for Toronto. At this point of our adventure, we had expected to be somewhere along the lines of Buffalo, NY.
Posted by Hobo Siren